Tang Soo Do (Hangul: 당수도, pronounced [taŋ.su.do]) is a Korean martial art incorporating fighting principles from subak (as described in the Kwon Bup Chong Do), as well as northern Chinese martial arts. The techniques of what is commonly known as Tang Soo Do combine elements of shotokan, subak, taekkyon, and kung fu.

During the late 1930s, Hwang Kee had mastered the native Korean martial arts of Subak and Taekkyeon. It was during this time that the Japanese occupied Korea, and the resident general, in an attempt to control the population, banned the practice of native martial arts, setting the penalty at imprisonment and or death. In 1936, Hwang Kee attracted the attention of the Japanese secret police, forcing him to pack his bags and set out on foot for Manchuria, where he experienced scenes of lawlessness and destruction whilst working as a railroad worker. As a result, Hwang Kee decided to enter China, where he would live the next 20 years. He entered China at night from the southern end of the Great Wall of China, which he scaled and descended into China on the other side.

“I climbed the wall at night, I was in excellent physical condition at the time and there were parts of the Great Wall that were lower than others. I ran up the side of the wall two or three steps and then grabbed at the top. Once on top, I distracted the soldiers guarding the other side by throwing rocks away from where I climbed down.”- Hwang Kee in an interview with Bob Liedke.

At this time in China, it was hard for any martial artist to find a master willing to take them on as a student. Despite this, Hwang Kee became acquainted with Master Yang, who taught Hwang Kee the northern style Yang kung-fu (Nei-ga-ryu).  Following the conclusion of World War II, Hwang Kee returned to Korea.

Between 1944 and the Liberation of Korea in 1945, the original schools or kwans of Tang Soo Do were founded in Korea by practitioners who had studied karate and had some exposure to kung-fu. Together, these original five schools and their teachers became the foundation of Tang Soo Do: 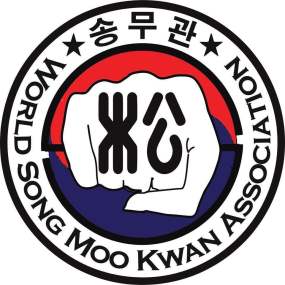 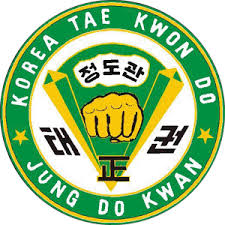 Shortly after the Korean War and in 1953, four more offshoot schools formed. These second-generation kwans and their principal founders were  Oh Do Kwan,  Han Moo Kwan, Kang Duk Won, Jung Do Kwan.

Tang Soo Do uses the colored belt system that was instituted by Jigoro Kano. However, minor deviations according to organization and/or individual school are commonplace. One differentiating characteristic of the Moo Duk Kwan style is that the black belt, or dan rank, is frequently represented by a midnight blue belt for students who attain dan rank. The reason for the midnight blue belt is the belief in Korean culture that black symbolizes perfection. As no one is perfect, the belt for the dan rank is a midnight blue color. It was also a belief of the founder of Moo Duk Kwan, Hwang Kee, that black is a color to which nothing can be added, thus blue signifies that a dan holder is still learning.

Many schools and organizations use the black belt. The Moo Duk Kwan, and some Chung Do Kwan schools of Tang Soo Do incorporate a red-striped midnight blue (or black) belt to denote individuals who have reached the rank of Sa Beom (master 사범님/師範님), or 4th dan. In other systems, the 7th through 9th dan ranks are signified with two red stripes running along the length of a midnight blue (or black) belt. The original non-dan, or gup, belt colors established by Hwang Kee were white belt, green belt, and red belt. In the 1970s, an orange belt was added after the white belt, along with either one or two stripes on the orange, green and red belts, encompassing ten gup (student) levels, and is currently the system in use in the Moo Duk Kwan. In the mid-1980s, a yellow belt was placed between the white and orange belt in some other organizations. Many variations of this ranking system are still used and typically employ other colors. However, this is primarily a western influence.

The black belts (or midnight blue belts) are called dans and each degree has its own specific name. The dan rank ranges from 1st through 9th degree. In the Moo Duk Kwan, dan level is known by its Korean numeration, such as cho dan (1st), ee dan (2nd) and sam dan (3rd), and onward. In many organizations, the titles of kyosu (instructor 교사/敎師) and sa bom (master 사범/師範) are separately awarded after successfully demonstrating ability, knowledge, understanding and character for that level in a dan simsa (심사/審査), or test. One may not test for kyosu (certified instructor) until 2nd dan, or sabom (master instructor) until 4th dan or above. Dan levels from 4th dan onward are known as kodanja (고단자/高段者), whether sabom or not. Also in the U.S., a simple timing structure was created for the dan ranking system. If in constant study, then it was easy to measure when testing for the next rank. The next dan number was equal to the minimum number of years that must be spent training to achieve that dan. For example, a first dan would have two years before they could be a candidate for second dan, and so on.